Most Faculty Say Technology Has Made Their Jobs Easier

Our 2017 Teaching with Technology Survey found that faculty have a positive outlook about technology’s impact on their work, teaching effectiveness, student learning and more.

In a survey of faculty members at colleges and universities across the United States, 73 percent of respondents said technology has made their jobs “easier” or “much easier.” And nary a one considered their job “much harder” thanks to tech.

Those findings came out of Campus Technology‘s second annual Teaching with Technology Survey, in which we asked faculty to dish on their use of technology, likes and dislikes, views of the future and more. Their responses revealed a lot about the business of teaching and learning with technology today — and how it has changed over the last year.

While 73 percent of faculty were positive about the impact of technology on their jobs, that count represented a slip of four percentage points from last year, when 77 percent believed the same. The number of faculty who think technology has made their jobs harder is holding steady (17 percent this year compared to 16 percent in 2016), and a growing faction feels that tech has not had an impact either way (10 percent this year compared to 6 percent in 2016). 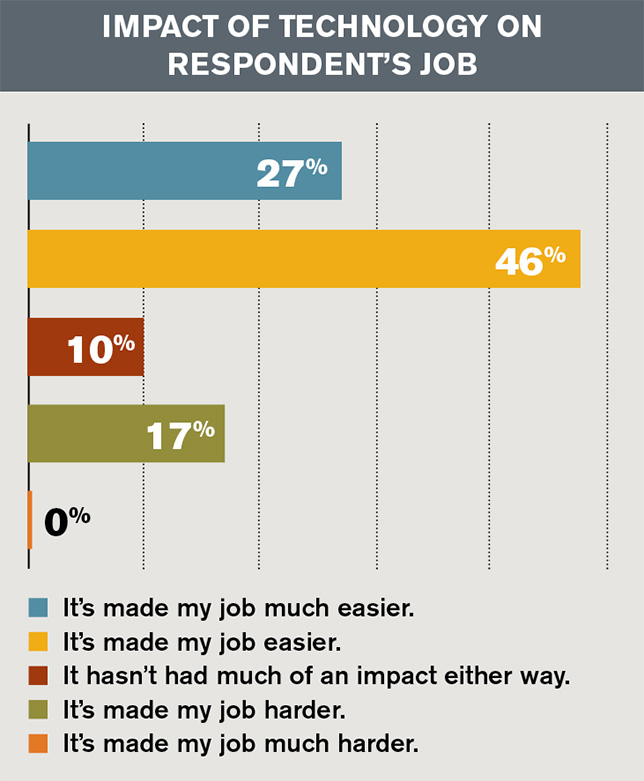 Whether technology is making life hard or easy for faculty, the majority of respondents (85 percent) feel the effort is worthwhile, agreeing that “Technology has positively affected my ability to teach.” That number is slightly lower than last year, when 88 percent felt the same.

The results were similar when it came to technology’s impact on student learning. Eighty-one percent of respondents saw a positive effect, compared to 84 percent last year. And 13 percent feel tech hasn’t affected student learning one way or the other. “Technology is only as successful as the teacher who uses it,” noted one respondent from a public university in California. 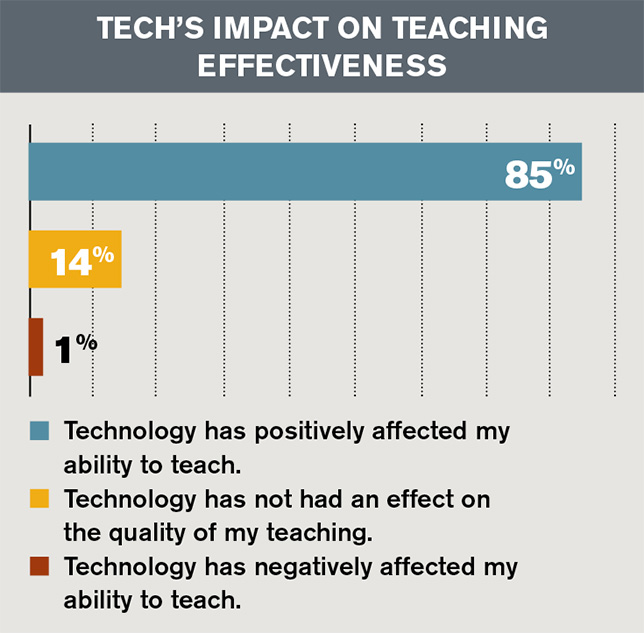 Overall, faculty in our survey hold an upbeat view of technology’s value in higher education: Eighty percent think tech has had an “extremely positive” or “mostly positive” impact on education, similar to last year’s count of 81 percent who felt the same. 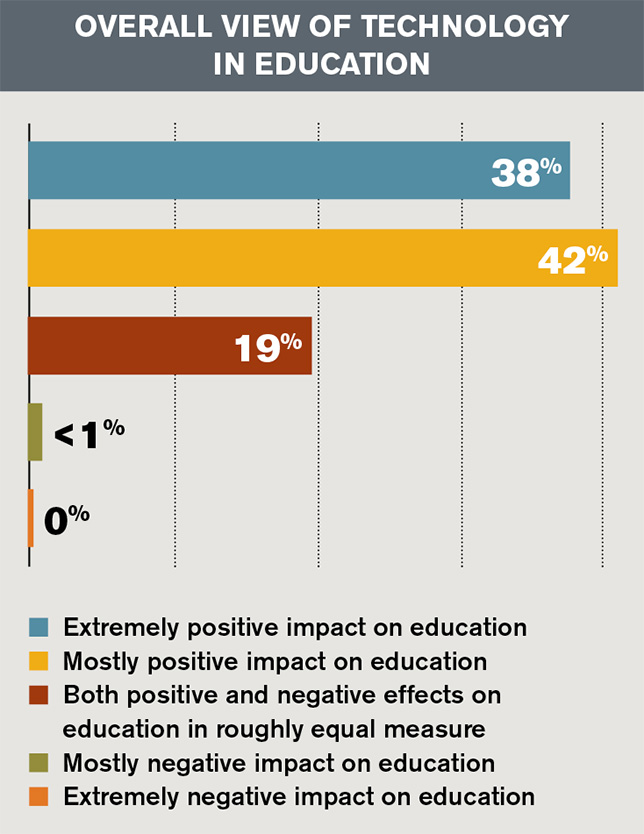 A handful of respondents were less sanguine, feeling that technology has had a “mostly negative” impact, and 19 percent saw both positive and negative effects. As one faculty member from a two-year institution in Texas asserted, “Technology is rampant, but the actual impact on learning is unknown. Random studies have been conducted, but no one really knows.”

“In some cases, technology is already overshadowing the learning process and making it more difficult,” opined a respondent from Illinois. “More technology is not always the answer and more technology cannot replace good instruction.”

“As with any facet of teaching and learning, there needs to be enough time for faculty to learn to properly use, adapt and implement for technology to be beneficial,” pointed out a respondent from a Florida university.

“Technology used badly can be horrible,” agreed a faculty member in Georgia. “Technology used to enhance student access to the world and their ability to collaborate and create can be awesome! It all depends on how you use it (like everything else).”

The full results of the Teaching with Technology Survey appear in the July digital issueof Campus Technology. Highlights from the survey will also be posted on this site over the coming months. You can check back for ongoing coverage in our Research section.

Our survey polled 232 faculty members across the country about their use of technology in the classroom, their likes and dislikes, their predictions for the future and more. The majority of respondents (68 percent) come from public institutions, with 28 percent from private nonprofits and 4 percent working at for-profit schools. Seventy-two percent work at four-year colleges or universities; 26 percent are at community colleges (the remaining 2 percent designated their institutional level as “other”).

Respondents represent institutions of a range of sizes, with about one-third (32 percent) working in colleges or universities with 2,500 to 9,999 students. Just under half (45 percent) of respondents are from institutions with 10,000 students or more.

Our respondents are veterans of higher education: The largest group (47 percent) has more than 20 years of experience, with 81 percent logging at least 11 years in the field.

The top three most common school and college types among our respondents are education (22 percent), business/business administration (17 percent) and liberal arts (12 percent). But overall, respondents work in a wide range of disciplines, from engineering and medicine to humanities and fine arts. The top 10 states with the most survey respondents are New York, Texas, California, Florida, Georgia, Virginia, Illinois, Missouri, Pennsylvania and Massachusetts.

About the author: Rhea Kelly is executive editor for Campus Technology. She can be reached at rkelly@1105media.com.

With student course enrollments for Fall 2017 on the way, we would like to invite our GLCA colleagues and students in Arabic and German to consider an expansion of course selection options via the GLCA Crossroads Shared Languages Program.

This program also has great benefits for faculty who

This semester, we are able to offer two SLP courses in Arabic and two in German. Our Arab colleagues from Denison University and Earlham College, Dr. Hanada Al-Masri, respectively Dr. Kelly Tuttle  are offering a language course on the intermediate level and an Arabic writing course.

For German, Dr. Lee Forester  is offering a course in German Linguistics and I  will teach a course on Germany’s Young Generation. All pertinent information can be found here.

The course enrollment process is simple with the respective registrars having contributed significantly to design a smooth experience for both students and faculty. All the information you and your interested students will need, can be found on this website page, please scroll all the way down.

First pilot semester student feedback results are very encouraging. (Full results are available, please ask.) All students found all aspects of the courses very “doable”, “engaging”, many also “exciting”. They all enjoy meeting other students with similar interests and especially appreciate the added diversity of both students and instructors. They are learning important inter-cultural lessons and can better apply technological skills in the academic environment and beyond.

There are no specific technology requirements. All students will need is a computer with a built-in camera (or plug in a webcam), a quiet, well-lit place to sit, and a stable internet connection. The SLP instructors will provide your students with a course orientation that addresses all technology aspects.

Colleagues who serve as on-campus advisors for students participating in a SLP course will receive a stipend. Likewise, if you chose to offer a SLP course yourself, there will be compensation from the GLCA SLP Mellon grant.

Please also look out for an announcement for a SLP workshop for anybody who is interested on any level of engagement that will take place at Denison University from May 21 (evening dinner) to May 25th (midday).

And finally, the most important feature of this program is that we are offering our students a wider range of possibilities to stay engaged in the language and culture they chose to study.

Please let me know how our SLP team can assist you with any further questions you may have. We look forward to hearing from you.

A big thank  you to all of you (we counted 96+!) for coming to our presentation as well as for your interesting and stimulating questions and comments! As promised, below you will find all the materials and the complete presentation. Please use as you deem appropriate, but do give us credit if you use the materials in their entirety or a significant amount/part of them.

New digital technologies and innovative hybrid teaching models transform how we teach students communication skills both inside and outside the classroom. In particular, oral proficiency dramatically improves with digital pedagogies compared to the traditional FL classroom. Such tools as Google+ Hangouts and Zoom with their multifunctional interaction tools (screen sharing, chatting, etc.) and Blackboard Voice Board have made online hybrid learning uniquely interactive, intuitive, inexpensive, and inviting for both students and teachers. These tools provide the individual student with more speaking opportunities, in pairs or in small groups, and task-based follow-up exercises, which then allow for constructive and structured feedback from the teacher. This pedagogical approach is especially useful in a globally connected learning context, where students increase both their linguistic and intercultural competencies. Students also learn digital skills and dialogue etiquette in a global context.

Participants were
– introduced to Google+ Hangouts, Zoom, and Blackboard Voice Board as interactive teaching and learning tools,
– learned how to use these tools to create interactive classroom activities,
– explored feedback strategies appropriate for these tools.

Participants were introduced to Google+ Hangouts, Zoom, and Blackboard Voice Board via the appropriate technology, i.e. specially prepared modules (ppt/slides/video material) was projected to the screen from a laptop and discussed allowing for feedback along the way.

We discussed specific examples of the actual experience with these tools from both German and Arabic intermediate-level language courses inviting participants to reflect on their own experiences and pedagogies.

We provided supporting materials, such as handouts of a rubric for both guidelines and assessment/grading, a description of a variety of class activities, and websites for further learning.

Bennett, Brian. (2012, May). Redesigning Learning in a Flipped Classroom.

How to Set Up a Blog from Scratch Using Blogger.com

How to not be a Helicopter Professor and why that matters for us and our students.

Collection of Digital Tools for Teaching and Learning with Categories Filter

Students can video-record themselves on Zoom (here reading a poem), upload video to Dropbox and share link with instructor for review.

Saddan Genao Lizardo, an international Denison student from the Dominican Republic, is introduced by AUBG student Uje from Mongolia. Uje created a PPT presentation for her intermediate German class with Dr. Stantcheva/AUBG.

Saddan at Denison and his home
counrty