WASHINGTON – What would international students in American classrooms most want their professors to do differently?

One caveat for the above numbers is that nearly 12 percent of students in the sample were native English speakers, so their presence in the sample could have skewed some of the overall figures in various ways. For example, 22 percent of all respondents said they’d like their professor to speak more slowly or clearly, while 32 percent of Chinese respondents did.

The sample was nearly evenly split between undergraduates (52 percent) and graduate students (48 percent). The most common classroom challenges identified by the students who were surveyed were: too many writing assignments (65 percent said this was a challenge), too much reading (cited as a challenge by 63 percent of respondents), writing in English (56 percent), participating in class presentations (56 percent), the perceived preferential treatment of native speakers (56 percent), participating in class discussions (56 percent) and professors’ lack of understanding of their culture (50 percent).

Mark W. Harris, the president emeritus of ELS, presented on the findings of the survey during a session Tuesday at the Association of International Education Administrators  annual conference focused on how faculty can “bridge divides” and integrate international students in the classroom. The number of international students in the U.S. has nearly doubled in the past 10 years and now exceeds 1 million, representing about 5 percent of the total student population, according to data from the Institute of International Education.

Recruiting international students was the number one priority for university internationalization identified by institutions who responded to the American Council on Education’s 2016 survey on mapping campuswide internationalization, which the association conducts every five years. In presenting a preview of some of the 2016 data – a full report on the survey is scheduled to be released this spring — Robin Matross Helms, the director of ACE’s Center for Internationalization and Global Engagement, said that one key finding is that there’s been a “backtracking” in terms of support for internationalization-focused faculty development opportunities from the 2011 to 2016 surveys. The percentage of responding colleges and universities that reported offering these kinds of opportunities was lower in 2016 than in 2011.

About a quarter of institutions report offering workshops for faculty on teaching and integrating international students — “my response was, wow, only a quarter?” Helms said.

Deardorff also shared recommendations to faculty international students have made in various focus groups she’s conducted with them. Recommendations include:

“A lot of this we know, but it’s nice to hear it reaffirmed by the students,” Deardorff said.

Denison Students: would you like to live in an exciting, culturally-diverse environment, get to practice your language skills and make new friends from many different cultures? Then the Preston Language and Culture House is right for you!

Hurry though, spots are limited and the application deadline is coming up quickly: March 1st!

Like our Denison University – Modern Languages Facebook page and you can see all of our Language and Culture Program events, which you Denisonians are welcome to join! https://www.facebook.com/denisonmodernlang/ 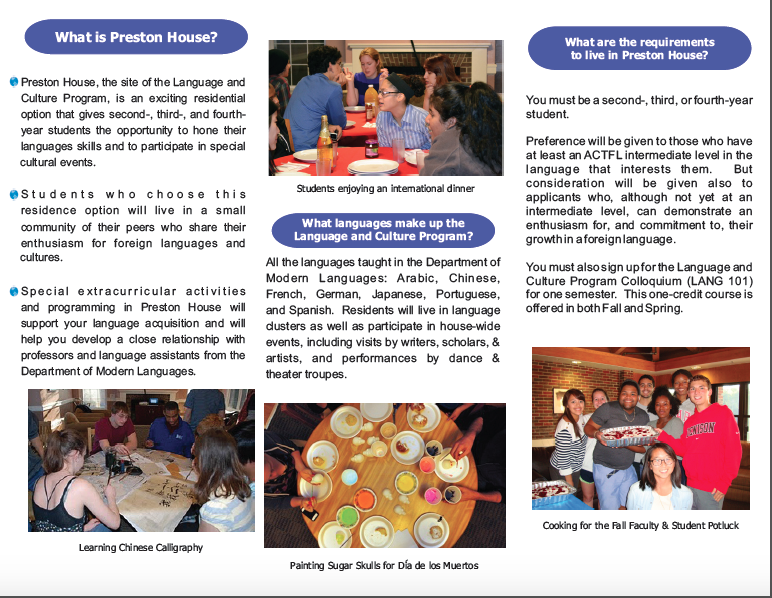